When you first catch a glimpse of the magical St. George’s Monastery (Choziba) in the Judean desert, the Desert Fathers’ Wisdom is brought to life in its uncompromising, breathtaking asceticism. This amazing cliff-hanging monastery, one of the world’s oldest and definitely one of the most inspiring churches in the Holy Land, is a must-see for the desert / archeological fans  / devout Pilgrims.

St. George Orthodox Monastery, or Monastery of St. George of Choziba is a monastery located in Wadi Qelt, in the eastern West Bank, in the occupied territories. The sixth-century cliff-hanging complex, with its ancient chapel and gardens, is active and inhabited by Eastern Orthodox monks. It is reached by a pedestrian bridge across Wadi Qelt, which many believe to be Psalm 23’s Valley of the Shadow. The valley parallels the old Roman road to Jericho, the backdrop for the parable of the Good Samaritan (Luke 10:29-37).

Here’s some beautiful aerial video footage to give you a taste of the area around St. George’s Monastery…

St George’s Monastery can be reached via the main Jerusalem – Dead Sea highway (Road 1). Take a left at Mitzpeh Jericho (or a right if you’re coming from Jericho) and follow the brown signs for Wadi Kelt. You can hike the Wadi all the way to the monastery but it will take lots of hours of arduous trekking in the desert under the blazing sun!  Up and down, for hours, a windy path! Not so easy for seniors or people with disabilities, but there are usually plenty of locals offering their donkeys for the ride (at a cost of course). 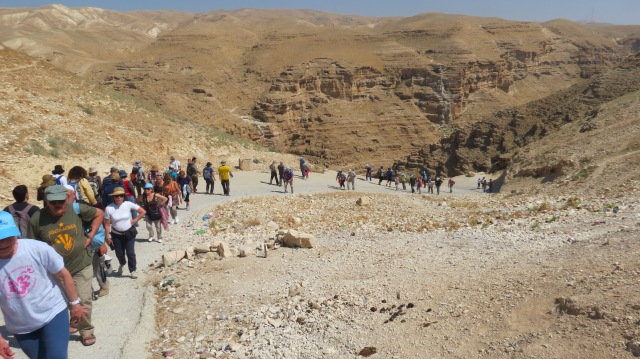 Check out the clip below for a real taste of the walk to St George’s Monastery … When I look at these photographs or watch the videos, I cannot believe I did all this walking!

St. George’s Monastery was originally started in the fourth century by a few monks who were looking to immerse themselves in the lifestyles and desert stories of  John the Baptist and Jesus. The monks, and perhaps most notably the hermit John of Thebes, eventually settled on the spot around a cave where it is believed the prophet Elijah was fed by ravens (1 Kings 17:5-6). The traditions attached to the monastery include a visit by Elijah en route to the Sinai Peninsula, and St. Joachim, whose wife Anne was infertile, weeping here when an angel announced to him the news of Mary’s conception.

The monastery became an important spiritual centre in the sixth century under Saint George of Choziba. Hermits living in caves in nearby cliffs would meet in the monastery for a weekly mass and communal meal.John of Thebes became a hermit and moved from Egypt to Syria Palaestina. The monastery was named St. George after the most famous monk who lived at the site. Destroyed in 614 A.D. by the Persians, the monastery was more or less abandoned after the Persians swept through the valley and massacred the fourteen monks who dwelt there. The bones and skulls of the martyred monks killed by the Persians in 614 A.D. can still be seen today in the monastery chapel. These 3000 and more martyrs’ relics are so alive that during their Supplication canon every week an exquisite fragrance and raw smell of fresh slaughtered blood are alternately exuded from them! 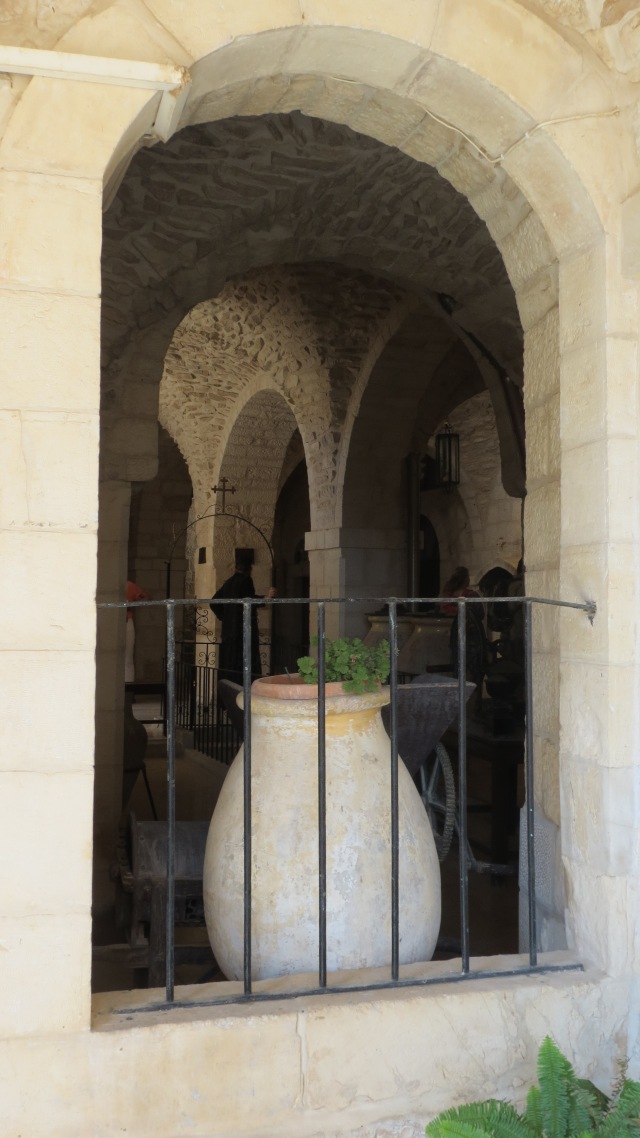 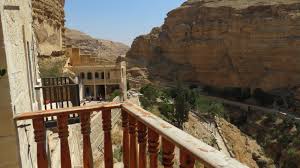 The Crusaders made some attempts at restoration in 1179. However, it fell into disuse after their expulsion. In 1878, a Greek monk, Kallinikos, settled here and restored the monastery, finishing it in 1901. Father Germanos, born Georgios Tsibouktzakis, who came from Thessaloniki, Greece, to St George’s in 1993 and lived there until he was murdered by Palestinian terrorists in 2001, was for many years the sole occupant of the monastery, he was named Abbot in 2000. Emulating the Wadi Qelt monks of late antiquity, Father Germanos offered hospitality to visitors, improved the stone path used by pilgrims to climb up to the monastery, repaired the aqueducts, and improved the gardens of shade and olive trees. 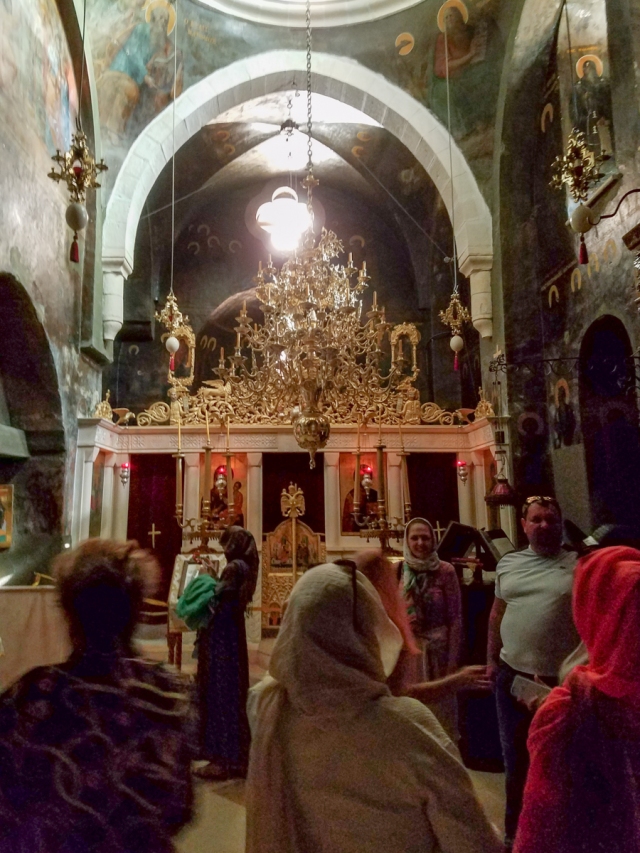 This is probably the most stunning discovery in the monastery: St. John Jacob (the Romanian) – a Hermit from the Holy Land with complete Incorruptible Relics! He was a great ascetic and a poet. He called himself “the child of zero” who “followed the One”. After his all night- vigils, he would briefly rest in the verandah of the monastery and write his so moving poetry, sadly not translated yet in English. In the next days I plan to translate and post here some of his most moving autobiographical poems. This Saint is famous for his miracles, from the discovery of his relics to nowadays.

This discovery was even more stunning for me personally because my spiritual father had introduced him to me the last day before flying from Lancaster to Greece and then to Tel Aviv. He also gave me a tiny piece of a secondary relic of him. What a ‘coincidence’! I knew nothing about him, other than his name, and then a brief google search, and here I found him most alive and incorruptible!

Let me close with Archimandrite Konstandinos, a holy Elder, very special in his hospitality and famous for his clairvoyance gifts. 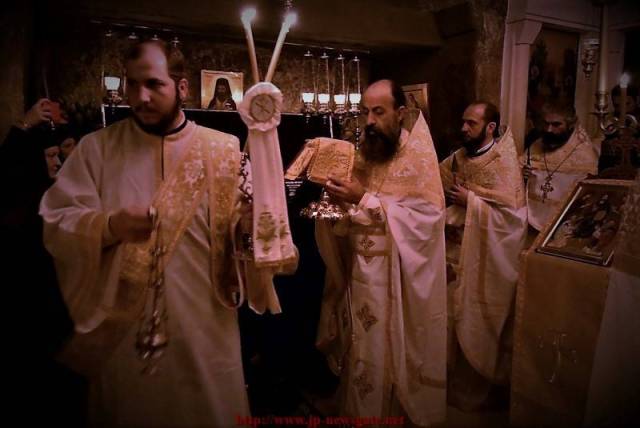 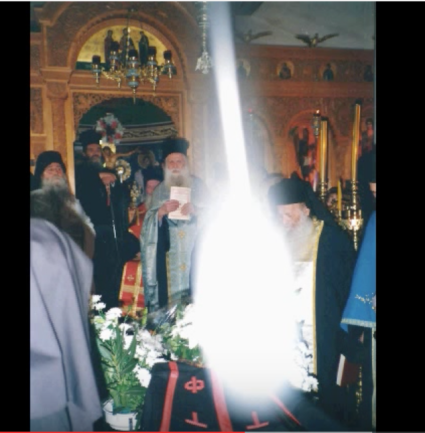