The Golden Gate shut behind them. At the same time a terrible roaring shattered the silence of the green valley. A majestic figure sat on the towering rock at the plateau in the middle of the forest. The silhouette of the Lion stood out against the starlit sky.

The Lion made a huge leap and stood at their midst. For the first time no animal dared to approach. The young couple and all the other animals stumblingly stepped back. They turned back to escape. But the Gate was shut. A many-eyed guard with a fiery sharp sword was blocking their way.

Then the Lion attacked the antelope. Immediately the panther charged at the goat. Then the big bear tore apart the tender calf. And the wolf the meek lamb. It had started. A war had begun. A cruel, relentless, and above all, prolonged, infinitely prolonged, war. The whole Creation would henceforth “groan as in the pains of childbirth”. (Romans 8:22) This night was the darkest of all.

… The Lion sat on the towering rock. His eyes gazed intently at the abysses of the night skyline. Something unusual was taking place up there, this darkest night of the year. A new star seemed to dawn and eclipse all the rest. The whole forest was in commotion. This night was hiding a mystery.

Further in the horizon a small company appeared. A humble little donkey was slowly climbing up towards the clearing. Sat on his back, a young woman, a tender daughter still, was gently clutching on her bosom a newborn baby. A white-haired old man was walking by their side. And this unusual, new Star was guiding their footsteps in the darkness. The tree tops were bowing humbly to the ground at their passage, venerating those unknown travelers.

Suddenly, before the night travelers made it to the clearing, a loud thundering shattered the silence of the dark forest. A horseback column was galloping towards them.

–  “We found them!” shouted the captain.

But as the column thrust menacingly forward, a terrible roaring shattered the silence of the dark forest. The Lion made a huge leap and stood between the night travelers and the soldiers on horseback showing his terrible teeth to the soldiers. Stunned, the animals of the forest followed immediately their king. The scared horses would tear from their reins and got up on their hind legs. The captain went wild.

In vain. All bows fell immediately to the ground when they touched the animals’ bodies. Like hitting steel. The horses grew uncontrollable. Any minute and they would flee back to the high land in a wild stampede.

The leader dismounted in a frenzy. Blind in his fury he hurled himself down in a bold leap and thrust himself to the baby. Menacingly he raised his sword to slaughter it, but the sword froze in mid air. To his horror and shock he saw before him the sweet face of his own wife, holding his own baby in her bosom!

His knees bent, his body collapsed to the ground. Sitting on the humble donkey the Daughter was looking in his eyes with infinite compassion. A bright, otherworldly halo was opalescing in rays around Her face! The soldier felt small, powerless before this Godly Babe, who seemed so vulnerable and helpless in the arms of his fragile mother, yet everything seemed to bow before Him.

Quietly all the animals surrounded in worship the human synodeia. The nod of the little child, invisible, yet omnipotent, was gently leading the lion and the calf together, the bull and the bear, the wolf and the lamb, the leopard and the goat. Under the spell of this otherworldly Mystery, the soldiers dismounted in awe and knelt side by the side with the wild animals.

Time had stopped. The Golden Gate was open again. No longer does the fiery sharp sword guard the gate of Eden. The Babe mystically summoned all back to Paradise. A prophecy of old took flesh:

“The wolf will live with the lamb,

the leopard will lie down with the goat,

the calf and the lion and the yearling[a] together;

and a little child will lead them.

7 The cow will feed with the bear,

their young will lie down together,

and the lion will eat straw like the ox.

8 The infant will play near the cobra’s den,

and the young child will put its hand into the viper’s nest.

9 They will neither harm nor destroy

on all my holy mountain,

as the waters cover the sea.

The Babe raised His Hand, a tiny, soft hand, yet capable to govern the whole Universe. The Babe blessed them with the Sign of the Cross. The Prince of Peace had been born on earth. The ancient, cosmic warfare would soon come to an end. Maran Atha!

4 comments on “The Prince of Peace” 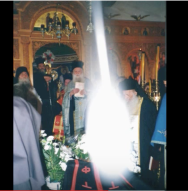