Elder Ephraim and Gerondissa Macrina. Elder Ephraim of Arizona wrote of blessed Macrina: “She was an extraordinarily virtuous person and was distinguished by her humility, meekness, attentiveness, and ceaseless prayer. She had a wondrous purity of mind. I have never seen such pure thoughts in any other person.

The blessed eldress [our holy mother among the saints, Abbess Makrina of Portaria] always taught her sisters and those who came to her for spiritual advice to give glory to God for all things: for the so-called good and the so-called bad. Here is a story she related regarding this:

In one of the villages near her monastery there lived a pious couple who had a ten-year-old son. Their next-door neighbour was an old woman with an intolerable personality. She was constantly berating everyone, angrily and unfairly scolding her neighbours, and when their son would return from school she would throw sticks and stones at him.

The next day, total silence reigned in the old woman’s house. She did not go outside to pour out her wrath upon her neighbours. The father went to see how she was doing and discovered that she had apparently died in her sleep. He began to pray to God in order to understand how this could happen, and the Lord said to him, “When you answered, ‘Glory to God!’ I shortened her life by ten years. When your wife gave the same reply I took away another ten years. And when your son said the same thing and also glorified Me, I took away the final ten years of her life.”

Source: Lessons from a Monastery 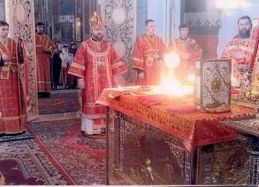