“…… I learned from the internet that the journalist Angel Bonchev was preparing a book about the unknown for us Saint Nikephoros the Leper, at a critical moment when the world was covered by the coronavirus pandemic and thousands died, killed by this new plague.

I called him on the phone and he briefly told me about his suffering life and the heavy cross that had been given to him. I was very anxious and disturbed in the weeks before by all that was heard on the media, but at that moment I felt comforted, especially when I learned that St. Nikephoros had appeared to a man in Greece to inspire courage and a willingness to help people against this evil.

Since up to this point I did not have much information about his life, akathist, prayers, I was comforted by the little I already knew and told myself that the saint would help, I had faith that he would be with us, I felt close to him. I cried all night, praying to him, thinking about what was happening in the world and the cases of infected people that were growing every day in Bulgaria.

At 4 o’clock that night I fell asleep. In my dream, he visited me – Saint Nikephoros the Leper. I recognized him immediately. I saw him in his black dew, standing up, holding a golden cross in his right hand. He addressed me with the words: “Warn all Christians to pray to me, but repeatedly. Let them also read the services. There is a cure and this is the Holy Communion. There’s also a herb to drink, it’s thyme, it kills viruses. And in any case, be sure to visit the house of God at this difficult time, because there is no contagion there and no one can be infected. ” It was the first night.

The next night, he came again and said this time that many Christians, and not only, had prayed to him because he had also spread through social networks about his appearance in Greece. He also told me to tell my son to pray to him, but not only once, as he had once said to him, – that is not enough. “Many times,” the saint repeated. The next day I asked my child, “How many times have you prayed to St. Nikephoros?” And he replied that only once in the morning. I explained to him that it was not enough.

The third night I saw him again. But this time, the most important thing I understood was that Bulgaria would be protected from the virus. I turned to him with the question: “Will all of Bulgaria be preserved?” He said to me, “Yes!” At that moment I saw our country as a map, and he stood over it, over Southern Bulgaria, and more precisely somewhere over Plovdiv. And he said, “Ring the bells, ring the bells, ring the bells!” I asked, “Are there bells in the Diocese of Plovdiv?” “Yes!” He said very briefly and affirmatively. Then he ascended to heaven, and with his golden cross in his hand, he blessed from above. From the very cross, a light came down and illuminated the whole country. The last thing he said was, “It will pass!”

After all this, a tremendous change occurred in me – the reassurance and strength that Saint Nikephoros the Leper Coronavirus Miracle Worker breathed into me, in the face of the panic that has engulfed everyone in the world and in our country … “

Based on a testimony from Bulgaria

In the photo a monk with the icon of the saint of his name: Saint Nikephoros the Leper. Vatopedi Monastery, Mount Athos. 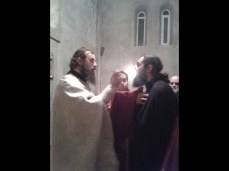