Saint Filothei was the first to arrive in my home, but the most tenacious saint was Saint Paraschiva of Iaşi.

I feel most humble and sad about my behaviour to Saint Paraschiva. The story goes that around 10 years ago a very pious Romanian lady moved away and gave me a quantity of spiritual books and religious objects and icons. I was by then more open to icons and decided I had to find a place for them. Since I had little contact with the Romanian church, I had not actually heard of Saint Paraschiva and did not know who she was. There was a very large and imposing icon of her, which I placed in the dining room as the only room large enough to accommodate it. There it remained, but I never felt any connection with it. I found it a little frightening if anything.

A few months ago, I decided I had to make room for more icons because the saints were beginning to arrive to my home in numbers. I decided to ask of my Romanian friends if anyone could accommodate St. Paraschiva. Someone was thrilled to welcome her, and I was so humbled to see the love with which this friend took the icon. Back home I felt a little sad that I was so lacking in love and hospitality. Since the lockdown began, I started tackling my cellar which is a little like Alladin’s cave, but mostly full of old and useless things. Hidden behind a pile of books I found a very large print of St. Paraschiva!

I have no idea where it came from. My heart leapt up with joy and found it very beautiful. I felt she gave me the chance to make up for my previous indifference and unkindness. I placed her icon at the centre of my icon corner, and everything felt right in the house after that. How patient and kind the Saint was! Around the Figure of the saint there are 4 other Romanian women saints among which St Filofteia herself. I would like to think that she brought friends. I might be wrong, but I feel the arrival of these Romanian great saints is like a call from afar for me to go back in some way to my spiritual roots and discover new riches.

Anyway, St Paraschiva is here to stay at the heart of my home, and I hope that through prayer we may become closer and closer. Reading about her life was most interesting because I had thought she was a purely Romanian saint since her relics are to be found in Iaşi and there is such great devotion to the saint all over Romania. I remembered that two parishioners had a very lively argument about Saint Paraschevi or Paraschiva or Petka (not to be confused with St Paraskevi of Rome, 2nd century martyr) and whether she was Romanian or Greek. Both ladies must have loved her very much and wanted to claim her as their own. As a matter of fact, she is well known and greatly loved in all Orthodox countries.

I discovered that she was as most people know, born in modern day Turkey of Byzantine parents in the 11th Century. As a child, she heard the words of St Mark’s Gospel in church: “Whoever wants to come after Me, let him deny himself, and take up his cross, and follow Me,” and was greatly moved. They awakened in her great zeal to relinquish her comfortable life and embrace asceticism. She gave away all her clothes to the poor. As her family opposed her calling, she ran away from home to Constantinople and then to Chalcedon and then to Heraclea Pontica. The Theotokos appeared to her on many occasions. She lived a very austere life and her voyages took her to Jerusalem, where she wanted to spend the rest of her life.

She entered a monastery in the Jordanian desert where she lived a greatly ascetic life. She saw an angel who asked her to return to her birthplace, where she continued her life for 2 more years as a stranger. She died at the age of 27. Her body was buried by the sea as a stranger in an unmarked place. By divine providence, her body was discovered uncorrupted and placed in the church of the Holy Apostles and great miracles were performed by the saint there. Her relics travelled all over the Balkans including Greece, Bulgaria and Serbia until, in 1641 her relics were brought to Iaşi in Romania. On the 26th December 1888, her relics have miraculously survived a great fire which turned to ashes everything around except the relics of the saint.

Her feast day is on the 14th October. Pilgrimage at the shrines located in the Metropolitan Cathedral of Iaşi has become one of the major religious events in Romania. Hundreds of thousands of pilgrims gather each year in Iaşi in the second weekend of October to commemorate St. Parascheva, while the city itself established its Celebration Days at the same time. Innumerable are her miracles and it seems whatever the problem, Saint Paraschiva will intercede successfully.

You are worthy of praise, Paraskeva. You loved the ascetic and hesychast life. You ran with longing to your Bridegroom, Christ. You accepted His good yoke in your tender years, marking yourself with the sign of the Cross. You fought against impure thoughts; through fasting, prayer and the shedding of tears you quenched the burning coal of the passions. Now in the heavenly bridal chamber of Christ, as you stand together with the wise virgins intercede for us who honor your precious memory.

Let us all piously praise all-honorable Paraskeva, the intercessor for the afflicted. She gave up her earthly life and received eternal incorruption. Therefore, she has been granted the grace to work wonders by the command of God.

ENCOUNTERS WITH SAINTS/ PART B

2 comments on “Saint Paraschiva of the Balkans” 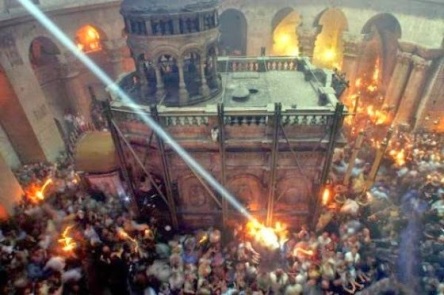